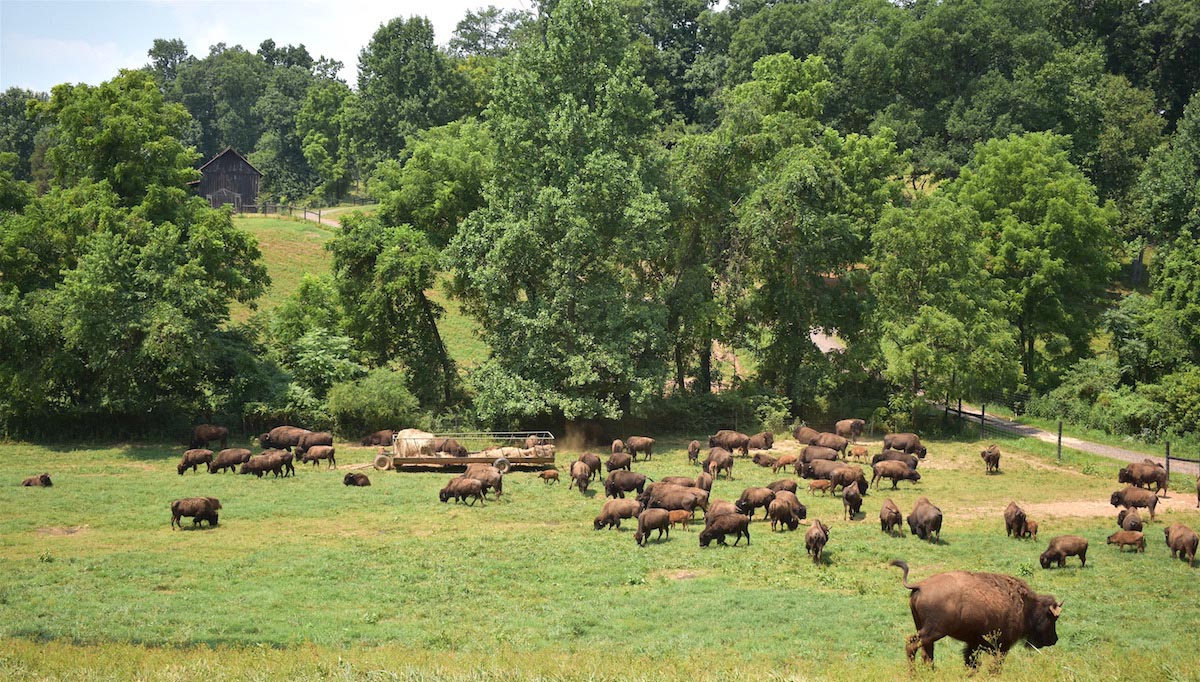 Several hundred years ago, Virginia is thought to have been home to the largest population of bison in the Mid-Atlantic. An estimated 70 million American Bison once roamed in herds across the the country. Due to mass over-hunting which escalated during the railroad expansion, bison were close to extinction by the late-1800’s. Through the bison protection law, land preservation, and increasingly, bison farming, the species have made a come-back and are now an estimated 70,000 in population. Today you can find one of the largest private bison herds in Virginia on Cibola Farms in Culpeper County.

Cibola Farms rests on nearly 300 acres of lush, green pastures and tree-lined hills located ten minutes from downtown Culpeper. Cibola Farms is own and operated by Rob Ferguson and Mike Sipes, whose mission is to produce healthy foods through natural, chemical-free methods that are founded in ecologically sound agriculture practices. Rob has a background in business and wildlife management, and he sought out bison farming for the challenge. Mike came to farming by way of his former career as a personal trainer and nutritionist, after he learned about the health benefits of bison meat. Bison is low-fact, high protein meat that is rich in omega-3's.

Rob and Mike purchased the property in 1999, and then got to work clearing the pastures, building paddock fences, and had cattle equipment custom-welded in order to reinforce structures for the much larger and stronger bison herd.  Today, with the help of the main farm assistant and craftsperson, Laura, as well as a couple seasonal farm hands, Mike and Rob manage a herd of about 400 grass-fed bison.

The pastured bison roam in packs inside enclosed pastures (paddocks) on the farm, freely grazing on natural grasses. Two days prior to our tour of the farm, the paddocks were filled with grasses standing more than three feet high. On today’s visit, the fields of grasses occupied by bison stood at a lowly three or four inches tall. Every two or three days, bison herds are moved to greener pastures as part of the intensive rotational grazing management system. The management system is in harmony with bisons' natural instinct to graze while roaming in packs.

Although bison are farmed, they are still considered undomesticated animals. Bison require a calm environment and constant attention in order to keep them calm. If provoked, bison can clear a six foot fence from a standstill. A full-grown bull can stand taller than six feet and weigh more than a ton, while the female bison can reach four to five feet high and weigh over one thousand pounds. Mike has scars from being gored from his time caring for bison. All that is to say, extreme caution and dedication is required of ranchers because bison are immensely strong, agile, wild creatures.  The paddock and chute on Cibola Farms are custom-built designs that were checked for humane, low-stress handling by an assistant of Temple Grandin, the expert livestock system architect.

Cibola Farms produces grass-fed, hormone-free, antibiotic free bison meat. Through a management intensive rotational grazing system, a herd and pastures symbiosis is created that mirrors bisons' role in the wild. The farm pastures are divided into smaller sections and bison are rotated to new paddocks every three or four days, allowing each pasture for a thirty day period of rest. Bison are grouped into smaller herds, organized to keep nursing calves with moms, to separate bulls from steer, and to sort by age and weight for processing. During grazing, bison spread waste and aerate the soil with their hooves, and as a result, naturally fertilize the fields and promote healthy, new growth.

To regenerate microbes in the soil, the pastures are sprayed on occasion with cow’s milk (from the farm’s non-commercial dairy). Mike joked, saying that he would call himself a grass farmer just as much as a bison farmer.  Nutrient-rich legumes and grain, like sorghum, are spread across the pastures in use to naturally enrich to the bisons diet. Each paddock has its own water trough connected to a clean water distribution system, and stock of grain off to the side of the clearing, for at-will feeding. The grains supplemental the foraged diet which naturally helps impede parasites and produces a more tender meat product. For these reasons, Cibola Farms is not 100% grass-fed bison, but chemical-free, pastured bison that primarily consumes a diet of grass.

Sustainable farming is defined by Cibola Farms as the combination of humane livestock handling, natural farm production, and the ecological practices. Like many of our local, small farm partners, you will not find a USDA Certified Organic Label on the packaging yet as the cost and labor to become certified is high. We can attest to the holistic, regenerative agriculture practices on the farm and the quality products speak for themselves.

Despite the rising demand for pastured bison, Rob and Mike recently discontinued selling products at local farmers markets because the extra hours and labor required to run booths at the market far exceeded market revenue. Instead, their business is streamlined to direct sales at the farm store, online orders, and direct door delivery with 4P FOODS. Cibola Farms is a great example of how the 4P customer base directly supports the livelihood of hard-working farmers. As a 4P partner, farmers like Rob and Mike can dedicate more time to animal husbandry and being good stewards of the land.

Look for Cibola Farms pastured ground bison, select steaks, or gourmet flavored sausages, like bourbon and fennel available in our Meat Subscription. It is important to note that bison meat cooks quicker than beef alternatives, due to the lean consistency. Check out our Bison Recipe Board and Cibola Farms Recipes for cooking ideas. The farm store is open daily to sell a full selection of bison meat and leather goods, such as bracelets and wallets.

Cibola Farms
Back to Our Farmers