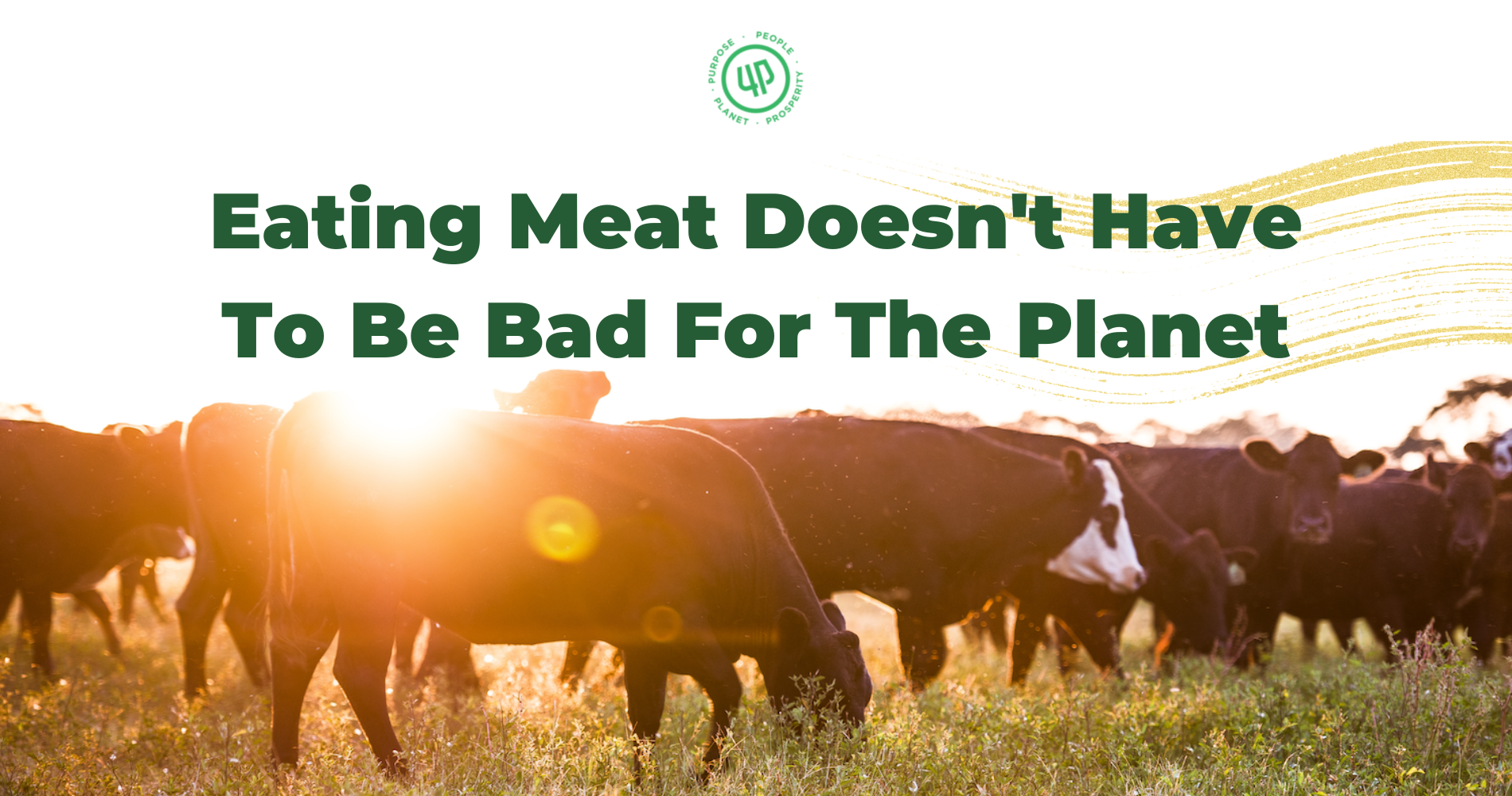 Eating Meat Doesn't Have To Be Bad For The Planet

There are plenty of good reasons many of us choose not to consume meat: animal welfare, ethical, taste, health, or lifestyle. If climate change is one of your reasons for restricting meat from your diet, we have a regenerative perspective that just might change your mind. And, you might be surprised to learn,  eating regeneratively raised meat can help heal the earth.

The industrial farming and treatment of animals is a big contributor to negative climate impact, and rightfully so. The Food and Agriculture Organization of the United Nations estimated that livestock are responsible for 14.5% of worldwide emissions with cattle and hogs providing the most emissions for livestock. The practices used in industrial farming are bad for the environment, bad for the people, and bad for the animals. However, you don’t need to give up meat entirely to combat climate change.

“Regenerative agriculture is actively rebuilding organic matter in the soil, it is rebuilding ecosystems, and it is reversing climate change,” says Amanda Mac De Villiers, 4P Foods Meat & Dairy Buyer and Grower Support Specialist. “Partnering with a grower like White Oak Pastures that is certified EOV by the Savory Institute aligns really well with the 4P Foods mission.”

At 4P Foods, our  work with independently-owned farms rebuilding a regenerative food system is central to our mission. White Oak Pastures, located in Bluffton, Georgia, began its regenerative farming practices in the early 2000s and now humanely raise 10 species of animals living in symbiotic relationships with each other and the land. Animals born at White Oak Pastures remain there from beginning to end. They are raised ethically and processed all on the same land . AND, they  sequester carbon!

“Our farm is creating more in terms of organic matter in the soil and microbial biodiversity than it is depleting,” says Will Harris, Owner & Operator of White Oak Pastures and fourth generation cattleman. “This shows that it is possible for humans to positively contribute to the environment through our food production system- using holistic management and planned grazing of livestock.”

Regenerative Grazing (verb):  a management practice that accounts for the optimal resting time of the land to prevent overgrazing and allow regeneration of degraded land.

In 2019, a third-party sustainability science firm, Quantis, released a study showing that White Oak Pastures is storing more carbon in the soil than its pasture-raised cows emit during their lifetime.

“Regenerative agriculture means a shift away from a food supply that is based on degradation, exploitation, and extraction,” says Amanda. “And, none of this is new! Some of the exciting technologies associated with regenerative agriculture may be  recently developed, but the foundational practices are based on ancient and Indigenous principles and wisdom. Rather than shifting yet further away from our roots, we’re shifting back as we move forward. Like White Oak Pastures says, this is radically traditional farming.”