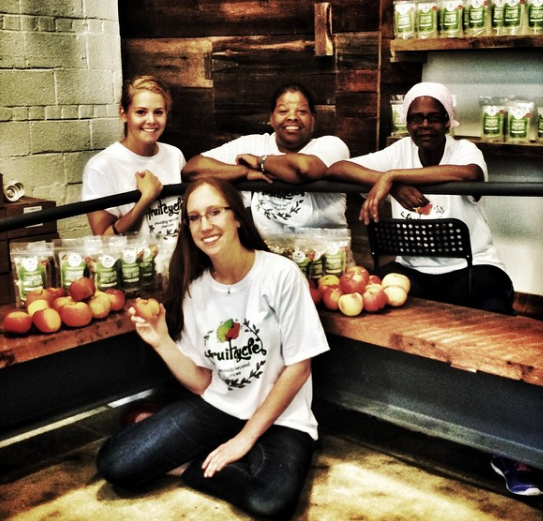 When Elizabeth Bennet visited an apple orchard in the summer of 2013, she was startled by what she saw. Tons of fruit were going to waste because they were bruised or didn’t meet the grocery store beauty standard. She had been working for a small nonprofit that worked with sustainability before, and decided to tackle the food waste problem. She founded Fruitcycle to raise awareness of the fact that 40% of the US food supply goes to waste, while 1 in 6 people go hungry.

Only buying apples from small, sustainable farmers that are within 100 miles of DC, Fruitcycle helps farmers make a profit on their “seconds.” One of the farmers Bennet works with is Matt Harsh from 78 Acres farm in Smithsburg, MD, and she has turned over 15,000 lbs of apples into apple chips to date. The apples get a makeover treatment by having the bruises cut off and then sliced and dehydrated into apple chips. For the cinnamon apple chips, they’re sprinkled with cinnamon – and that’s it.

In 2016, Bennet partnered with Together We Bake, an empowerment-based job training program for women in need of a second chance in Alexandria. The women learn useful job skills and receive ServSafe Certification, while participating in a personal development curriculum that helps the women gain self-awareness and self-esteem, and encourage responsibility and accountability.

With Together We Bake, Bennet has expanded to making kale chips, trail mix, cinnamon pecan granola that uses her apple chips, and other delicious goodies.